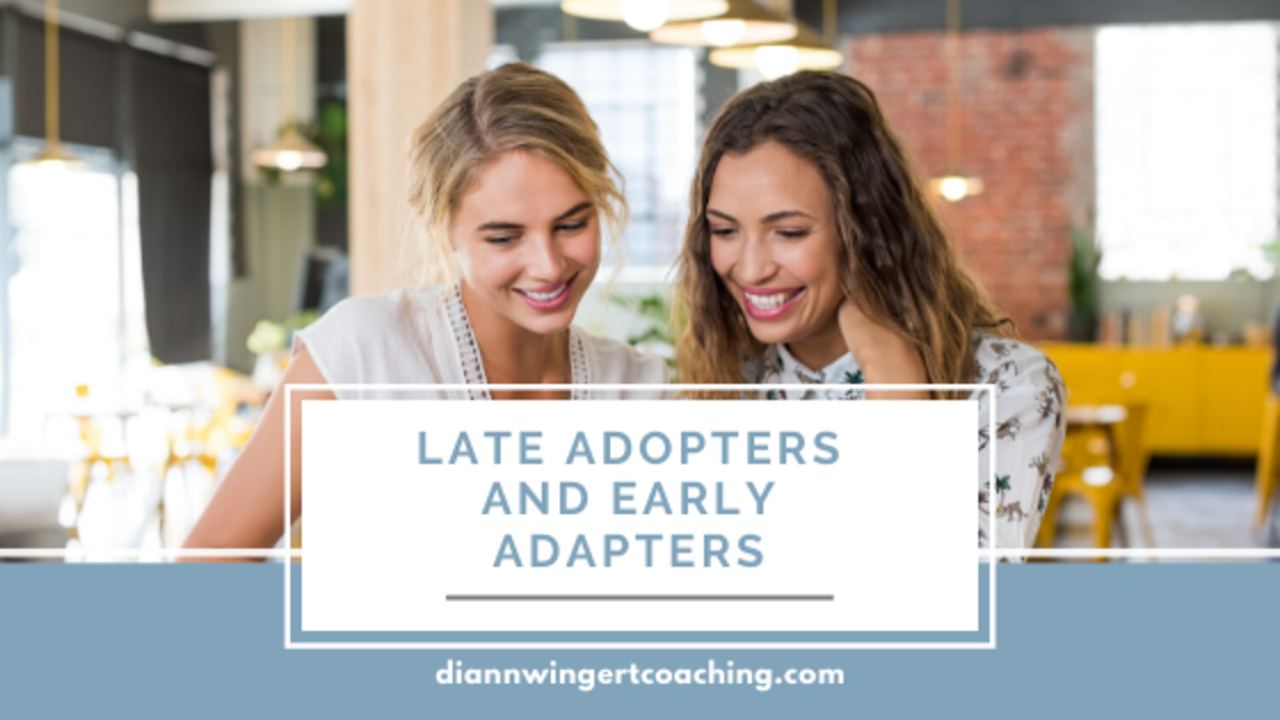 It wasn't until three separate people who all know me well and have personalities very similar to my own - my best friend, my daughter and one of my favorite clients. within the span of one week, all told me they were binge-watching a new show on Netflix and know I would love it until I finally got curious enough about it to check it out. And, as it turns out, they were right. My husband is away on a four-day business trip, which was more than enough time to blast through the entire season one of Dead to Me and then begin the second season. It is a picture-perfect example of my tendency to be a late adopter.

I always wanted to be an early adopter, a trend spotter, someone who could smell out the next best cooler-than-cool thing before anyone in their circle was even aware of its existence. The tech world is particularly fond of early adopters because they often make the best customers and go on to become superfans. Anyone who has studied marketing principles or observed pop culture knows that there are a small number of people who are two standard deviations from the mean when it comes to openness to new experiences, purchases, and technologies. They are the uber-hip kids on the block whom other kids helplessly look up to and follow. They try new things, invent new things, and are open to taking risks that others shy away from.

While the majority of humans just want to feel safe and choose what everyone else is choosing, there are a select few on the two extreme ends of the openness to new experience spectrum, those who are the early adopters and those who wish things would go back to the past, the so-called good old days. They don't want things to change and wish they could turn back the clock on the change that has been happening over their lifetime. I like the idea of being an early adopter and have some pity for those who are trying to hang onto the past, but I must admit that I am much more of an early adapter than an early adopter.

What I mean by this is that I am much quicker to see that things are not working out and aren't going to work out than the rest of the group that is doing the thing. To be more specific, I will usually be the first to realize that the sales strategy our company is testing it doomed to fail, the first to recognize that an abusive parent that social services is giving their kids back to is only going to hurt them again, the first to notice that the emperor truly has no damn clothes. And being so adaptive in this regard, noticing the dots and connecting them long before the others have done so, usually serves to make one rather unpopular.

It can also work in reverse. Not only can I see that something we are giving the old college try to is doomed to fail, but I will also be the one to come up with the innovative suggestion, the out of the box thinking, the non-linear solution that turns the entire situation around. I can recognize the patterns, see the gaps and overlaps, sort out the tangles and spot the one and the only path through the chaos, all without being able to explain when asked, how the hell I was able to do do. Early adapter indeed.

A certified coach and former psychotherapist. I specialize in helping high functioning, but underachieving women with ADHD overcome the roadblocks to confidence and success in both business and life. And, I am an entrepreneur with ADHD myself, so I really get you in a way no other coach or productivity guru can.

Running a business can be frustrating especially when you just can't seem to stay ahead of this ADHD thing. I GOT YOU! That's why I created my Free Guide "The 6 steps to ADHD Mastery.